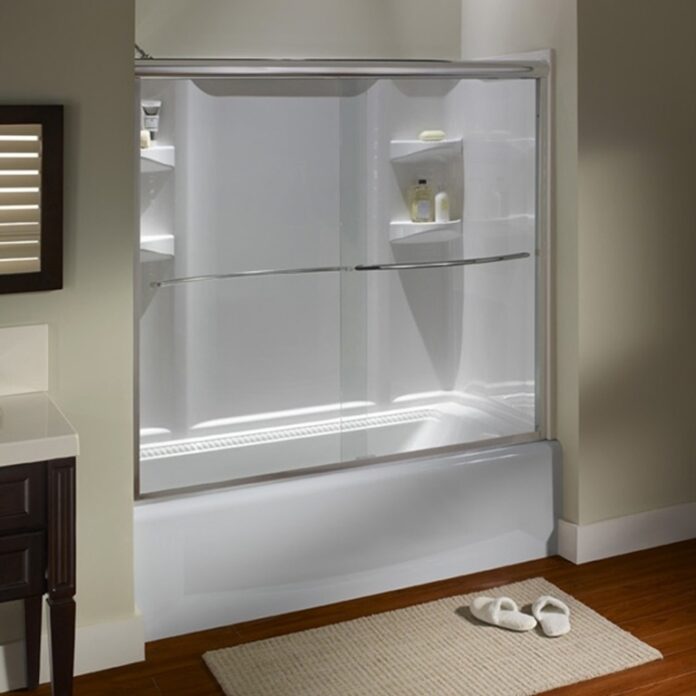 Did you know that there are 4 main types of shower doors available on the market today? Here’s the complete guide to choosing the right one for you.

Bathrooms are a hot commodity when it comes to home renovations today, and showers are a major focus. There are more types of shower doors than ever before, and each has its unique—and desirable—qualities.
The shower, especially its enclosure and door, is the first thing you notice when entering a bathroom. It does leave an impression!

In this article, we’ll look at the four main types of shower doors that are commonly available, variations within them, and the pros and cons of each. We’ll also consider types of showers and how to pick a door that complements the one you choose.

It shouldn’t be surprising that virtually all shower doors are made mostly of glass. Wouldn’t it feel claustrophobic to be in such a small, enclosed space with no view outside?

There’s still a lot of variation among the types of glass shower doors, though. There are nearly as many as there are types of showers, as you’ll see in the following sections.

A sliding door is a prevalent type of shower door, especially in older homes. You see these in either self-contained standing showers or shower-tub combinations—as a sturdier and a more watertight alternative to a shower curtain.

Sliding doors are usually framed with metal to protect the glass panels from all the opening and closing—especially when someone closes it a bit too hard.

A fixed shower door isn’t an actual door but rather a single wall separating the shower area from the rest of the bathroom. It can be either an all-glass wall or a partial, tiled wall (which can double as a shelf).

In either case. It’s just enough coverage to keep water from reaching the rest of the bathroom. The airflow also helps fend off mold and mildew. You still have to keep it clean, though!

Hinged doors are used widely as shower stalls. Historically, these have been used in most standalone shower stalls. They come in framed, unframed, or semi-framed versions depending on personal taste as well as the structural needs of the enclosure.

As part of shower enclosures, hinged doors need a stable structure. For example, for an unframed shower enclosure, each glass wall should be supported by at least one building wall. One side can be connected to the side of another glass panel with the appropriate hardware. 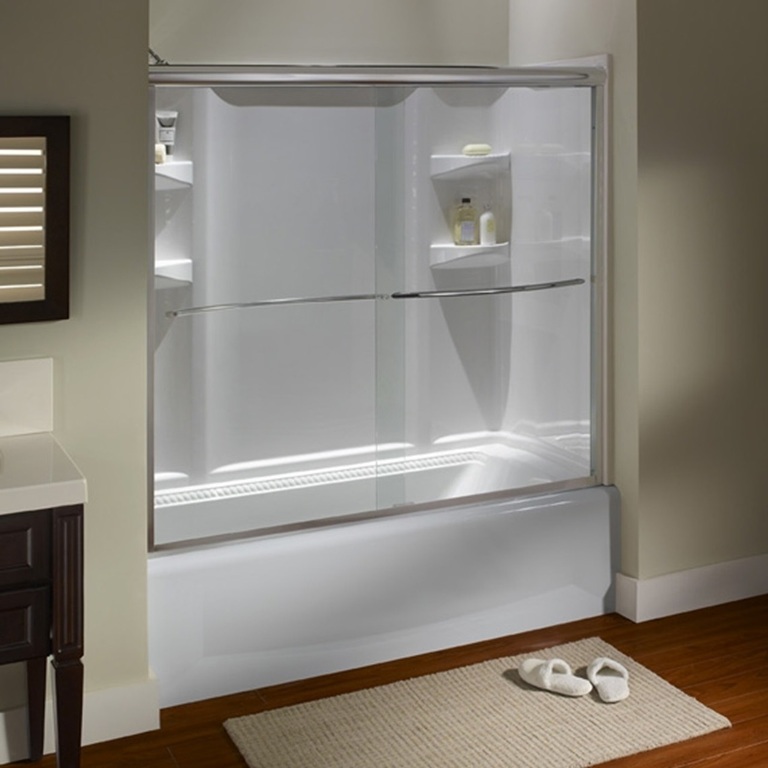 A hinged shower door is pulled outward to open, like a refrigerator door, and is usually held closed by a magnetic seal. There is a small handle on the inside of the door to pull it shut if needed. Unlike sliding and folding doors, hinged doors are nearly always single shower doors.

Folding shower doors are for bathrooms without the available space for, say, a hinged door that needs a clear pathway to open. A folding door is a less common alternative to a sliding door.

Folding shower doors have two or three hinged panels or a pair of two hinged panels that fold up against walls or non-moving panels. This design allows as much space as needed to enter the enclosure or tub.

Besides the broad categories we’ve just discussed, there are other attributes to consider. These effectively add subcategories to the categories above.

Framed vs. Frameless and Semi-Frameless

We’ve mentioned these above. Now we’ll consider their pros and cons.

Metal framing offers a more solid structure and can be as aesthetically pleasing as frameless or semi-frameless, especially when the framing material adds to the design. For example, a black steel or aluminum frame can be stunning.

Frameless shower surrounds and doors especially can leak of the showerhead isn’t positioned so that the water doesn’t spray onto the glass panel joints.

With a framed shower, the metal joints can be sealed with caulk. You can also use clear silicone caulk with either framed or frameless doors and enclosures.

With any glass shower, there’s always the possibility of pressure on the glass causing it to shatter—although a framed shower does offer some extra protection. A framed shower is also a better value.

Still, the lure of the new—and highly sophisticated—frameless and partially framed shower enclosures is compelling indeed. Whatever glass shower product you purchase. Be sure to take good care of the glass.

The Shape of the Enclosure

We tend to think of shower enclosures as being square or rectangular. However, there also are corner glass shower doors with round fronts and three-paneled configurations meant to save space. There’s also an alcove shower that’s set back into a wall.

The Type of Glass

Clear glass isn’t the only option for a shower enclosure. These come in multiple patterns, such as frosted, patterned, obscure, and rain. They also come with etched images.

Tempered glass also is an option. It’s less breakable than other glass and, like car windshields, safer if it does break.

Installing a shower door may or may not be a DIY project. It depends on the type of door and your level of expertise. When in doubt, call a professional. If you’d like to learn more about glass shower door installation, though, check out this site.

What can we say? Whatever type of shower door you choose, your shower will have a whole new look—whether it’s just the door you’re changing or the entire shower enclosure. Have it installed by an expert, and we expect you’ll be thrilled with it.

If you want your shower door to last a long time, be sure to give it the care it needs. All it takes to remove soap scum, mineral deposits, and other dirt is a periodic spray and wipe-down with vinegar. If it has any sealed areas, check on these too.

Meanwhile, if home remodeling is what appeals to you, take a look at our website from time to time to see what new ideas and products we’ve discussed in our articles.