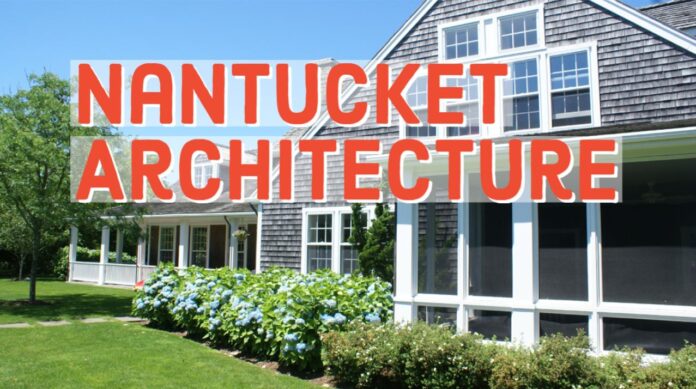 The island of Nantucket, MA, is a much-desired vacation location. The harborside town has more restored and preserved pre-Civil War houses and buildings than any other place of this size in the USA. This and its untouched nature and exhilarating ocean views make it such a magical place to be.

But it is the weathered gray shingle style houses that are the most iconic symbols of Nantucket, alongside its picturesque lighthouses and blooming gardens.

Nowadays, you can admire the beauty of the many cottages, houses, and estates built in this style while you are walking down the cobblestone streets, or you can even book one for your Nantucket vacation.

The term shingle style was introduced as a description for this architectural style by Yale Professor Vincent Scully in 1955. The originator of this distinctive style, though, is William Ralph Emerson. he is the architect who designed and built the famous Redwood House in Bar Harbor in 1879.

The idea of the shingle-style house is to blend it into its natural surroundings rather than for it to stand out. In fact, many of these beautiful houses are built in a way that looks like they are a natural continuation of the surrounding environment.

Apart from the distinctive wood cladding, other typical characteristics of this coastal New England architectural style are the house’s asymmetrical forms, their gambrel-pitched roofs, large verandas, and diamond-shaped windows. The typical shingle-style house from this style has little or no added decorative items.

They were inspired by the early decades of the colonial years. This is especially evident in the recognizable wood elements and materials which were used in the 17th century by the Old Colony when building houses in Massachusetts Bay. The style is considered to be among the first steps for the Colonial Revival and the preservation of the country’s history.

It was a significant shift from the previously popular Victorian style, which included intricate decorative elements and details. The style was inspired by Queen Anne and Colonial Revival styles. These houses were meant to be informal coastal retreats and country homes for the rich.

These shingle-style houses are a part of the charm of the East Coast and New England, especially the stately waterfront mansions and estates in coastal Maine, Cape Cod, Newport, Rhode Island, and Nant

Many famous architects like Frank Lloyd Wright, Stanford White, and Hobson Richardson, were hugely inspired by this style, producing some stunning examples of the New England Shingle-Style Houses.

One of the most prominent examples of this style is the summer residence of President George Bush at Walker’s Point Estate in Maine which was built in 1903.

Another prime example was the Kragsyde summer home on the coast of Manchester-by-The-Sea, MA, from 1882, which unfortunately was demolished years ago.

Luckily, thanks to the preservation policies and rigid development rules in Nantucket, the island is home to some of the best-preserved examples of this original American style. The island also has many new houses and buildings built in the same style too.

The wood shingle sidings called shakes in Nantucket are not just for ornamental purposes. In fact, they had and still have the practical purpose of keeping the inhabitants warm, dry, and safe in the often unfavorable weather on the island, especially in the winter.

White cedar is one of the most durable hardwoods, which can endure the longest in the salty air, and is resistant to rotting and insects.

The shakes used for cladding the houses in Nantucket are more durable than regular shingles. This is because they are split off rather than sawn smooth and tapered. Plus, the shakes are thicker than the shingles and usually are made of the best premium hardwood.

Nantucket used to be called the Gray Lady of the Sea by the sailors because of the heavy fog which used to sweep down suddenly and quickly on and around the island’s coasts.

The natural grey of the shakes on most Nantucket houses is referred to as weathered gray. Although it relates to the desire for a restrained beauty and for a merging with the landscapes, the color is beautiful and reminds the greenish-gray hue of a heavy fog falling above a grassy field.

When the shakes are first mounted, they are unpainted and have a natural white and yellowish color. But in just a few months, and especially after the first winter on the island, they naturally turn into this distinctive gray color.

These uniform gray cottages and houses play an essential part in the overall charm of this idyllic island. But the locals have found a way to make these weathered gray houses lighter and more beautiful by crawling red and pink roses on trellises and gorgeous gardens around these houses. You can see an overflowing colorful flower box on just about any window in these charming homes. The pink from the roses and the gray from the shakes create a magically beautiful combination.

The Rigid Building and Renovation Rules in Nantucket

Nantucket has very rigid rules when it comes to designing, building, and renovating houses on the island. All homes, with very few exceptions, need to have the same unpainted cedar shakes rather than other sidings or brick facades.

Plus, houses and other buildings should have pitched roofs, rather than flat ones, and be up to a certain height, as well as feature other elements typical for the New England shingle style.

Nantucket has more restored and preserved historical buildings than any other town of this size in the USA.Although some homeowners and architects may not be so happy about their preferences and ideas being limited, it is these rules that have preserved Nantucket and made it such an enchanting postcard-like town reminiscent more of an English village than an American town.