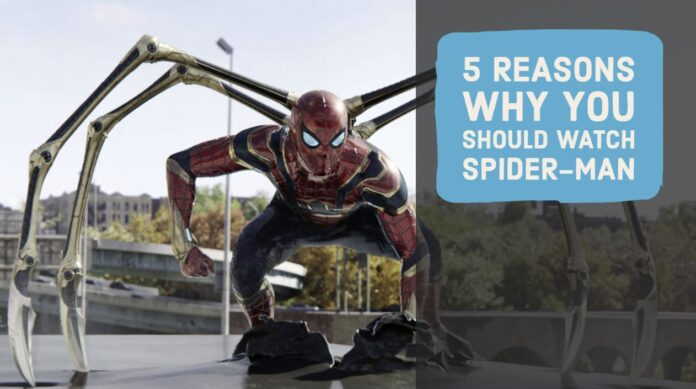 Spider-Man: No Way Home, directed by Jon Watts and released in 2021, is an American Super Hero movie originally from Sony. Based on the Marvel Comic character Spiderman, the movie has reached the next level of hype.

No Way Home is a story about what it means to be a Spiderman, and what responsibilities come with great power. If you want to watch this great movie in Australia, check ScreenBinge’s how-to watch guide for Starz Play.

Spider-Man: No Way Home is a must-watch movie. Here are the five reasons why we say this:

1.All 3 Spiderman in One Frame

Spider-Man: No Way Home features all three generations of Spiderman – Andrew, Tobey, and Tom in one frame. It is something the audience never expected!

The movie features them fighting the five Multiverse villains – Lizard, Gren Goblin, Doc Ock, Sandman, and Electro. You will surely enjoy the interactions among the spider-men and with these villains.

No Way Home is all about what the fandom expected and what they never thought would come.

Though we were skeptical about how all three would fit the screen, it is MCU, and they did it in the best possible way.

2.Friends of Peter Parker (aka Spider-Man)

Spiderman: No Way Home stars the trio of Zendaya (MJ), Jacob Batalon (Ned Leeds), and Marisa Tomei (Aunt May). It brings out the best of Peter Parker after all, who doesn’t need supportive friends?

MJ’s character is the romantic core of the show, but it also helps Parker see his lifestyle more clearly. The super-hero relationship and ups and downs between Holland and Zendaya grab the audience’s attention. The chemistry is strong!

The outstanding comedic presence in the movie is Ned Leeds. He brings out the humor keeping the audience engaged throughout the movie. He is the guy on the chair who seems happy to be a character in the movie.

Aunt May is an inspiring performance. She has always been at the heart of Spiderman movies for decades. Her death at the end led Peter to suffer a traumatic loss. She was the one who played a crucial role in her Nephew (Parker’s) journey to become a Spiderman.

None of the spider-men movies bring the sentiments as Spider-Man: No Way Home.

Spidermen could not save everyone around them. Yes, you read it right! Although the movie serves our multiversal joy and the Spiderman fan in us, it is also about second chances and sacrifices this time.

There is an emotional dilemma at every step of it. There are many events when Parker has to decide between doing what is right and wrong, doing the best for his loved ones, and doing what is expected from a Spiderman.

His identity is revealed, and he is extensively targeted without Tony being there to guide him in his way. There are many payoff moments in No Way Home.

The common fan shows up for Spiderman fighting the bad guys or swinging in the multiverse. You will jump off your seat out of excitement, or your heart will sink, watching the action-packed scenes.

4.Doctor Strange Returns to the MCU

The dip in the story is revolved around the multiverse exploration. The return of Doctor Strange adds a magical element to Parker’s problems. Though the relationship between Peter and Strange isn’t the same now, Spiderman finds a mentor in Doctor Strange, which is worth watching.

If you are confused about what more the Doc is doing in No Way Home or how he would Parker without his TimeStone, watch the movie and uncover the answers. We will let your fingers crossed here. No spoilers! Strange is always bound to be good.

There is a lot of excitement and impact in the movie about these villains. Seeing the villains return to the MCU has excited the spider-man fans.

Some of these villains have major roles in the movie, while others are there for supporting roles. They all shine brighter in the No Way Home than in previous iterations.

Their relationship with Peter Parker (aka Spiderman) and among each is epic and worth watching. Have some popcorn, these villains are a lot of fun when on screen. Kicks, punches, and emotional blasts give fans a thrilling experience.

We have shared a few reasons that make No Way Home a must-watch. Grab your tickets before you miss out on the show available at the cinema. After Avengers: End Game, No Way Home is the most loved movie, generating $260 million in revenue within the two days of release.

The movie has everything in it – the blockbuster actions, cheer-up moments, and twists and turns. You’ll leave the cinema with a smile and tears in your eyes after watching this movie.

Everything You Need to Know About the Oak Beams

7 of the Best San Diego Suburbs

Checklist to Help You Move Into a New Home

Know More About The Automatic Cutters That Are Perfect For Cutting

What Do Business Continuity Solutions Include

Comparing DocuSign vs Pandadoc vs SignNow

Who Are The Best Conveyancers In The UK

What You Should Know About Forex Bot

All You Need To Know About Hose Parts